Noise is unwanted sound. Sound is all around us; sound becomes noise when it interferes with normal activities, such as sleep or conversation.

Sound is a physical phenomenon consisting of minute vibrations that travel through a medium, such as air, and are sensed by the human ear. Whether that sound is interpreted as pleasant (e.g., music) or unpleasant (e.g., jackhammers) depends largely on the listener's current activity, past experience, and attitude toward the source of that sound.

The measurement and human perception of sound involves three basic physical characteristics: intensity, frequency, and duration. First, intensity is a measure of the acoustic energy of the sound vibrations and is expressed in terms of sound pressure. The greater the sound pressure, the more energy carried by the sound and the louder the perception of that sound. The second important physical characteristic of sound is frequency, which is the number of times per second the air vibrates or oscillates. Low-frequency sounds are characterized as rumbles or roars, while high-frequency sounds are typified by sirens or screeches. The third important characteristic of sound is duration or the length of time the sound can be detected.

For more on the basics of sound, check out this NASA Video

How is Sound Measured?

Sound intensity or level is measured by a unit called a decibel. But what is a decibel?

The loudest sounds that can be detected comfortably by the human ear have intensities that are a trillion times higher than those of sounds that can barely be detected. Because of this vast range, using a linear scale to represent the intensity of sound becomes very unwieldy. As a result, a logarithmic unit known as the decibel (abbreviated dB) is used to represent the intensity of a sound. Such a representation is called a sound level. A sound level of 0 dB is approximately the threshold of human hearing and is barely audible under extremely quiet listening conditions. Normal speech has a sound level of approximately 60 dB; sound levels above 120 dB begin to be felt inside the human ear as discomfort. Sound levels between 130 to 140 dB are felt as pain (Berglund and Lindvall 1995).

Because of the logarithmic nature of the decibel unit, sound levels cannot be arithmetically added or subtracted and are somewhat cumbersome to handle mathematically. However, some simple rules are useful in dealing with sound levels. First, if a sound's intensity is doubled, the sound level increases by 3 dB, regardless of the initial sound level. For example:

Second, the total sound level produced by two sounds of different levels is usually only slightly more than the higher of the two. For example:

Because the addition of sound levels is different than that of ordinary numbers, such addition is often referred to as "decibel addition" or "energy addition." The latter term arises from the fact that what we are really doing when we add decibel values is first converting each decibel value to its corresponding acoustic energy, then adding the energies using the normal rules of addition, and finally converting the total energy back to its decibel equivalent.

Sound frequency is measured in terms of cycles per second (cps), or hertz (Hz), which is the standard unit for cps. The normal human ear can detect sounds that range in frequency from about 20 Hz to about 15,000 Hz. All sounds in this wide range of frequencies, however, are not heard equally by the human ear, which is most sensitive to frequencies in the 1,000 to 4,000 Hz range. Weighting curves have been developed to correspond to the sensitivity and perception of different types of sound. A-weighting and C-weighting are the two most common weightings. A-weighting accounts for frequency dependence by adjusting the very high and very low frequencies (below approximately 500 Hz and above approximately 10,000 Hz) to approximate the human ear's lower sensitivities to those frequencies. C-weighting is nearly flat throughout the range of audible frequencies, hardly de-emphasizing the low frequency sound while approximating the human ear's sensitivity to higher intensity sounds. The two curves shown in Figure 2 are also the most adequate to quantify environmental noises. 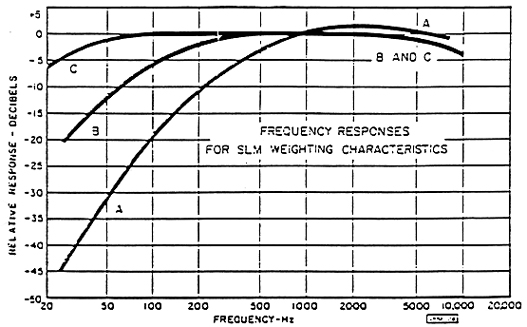 Figure 2. Frequency Response Characteristics of A and C Weighting Networks.

Sound levels that are measured using A-weighting, called A-weighted sound levels, are often denoted by the unit dBA or dB(A) rather than dB. In written documents, once it is clear that the A-weighting is being used, the adjective "A-weighted" is often omitted and the measurements are simply expressed as dB. This is often the case in many environmental impact documents, and the use of the term dB units refers to A-weighted sound levels.

Noise potentially becomes an issue when its intensity exceeds the ambient or background sound pressures. Ambient background noise in metropolitan, urbanized areas typically varies from 60 to 70 dB and can be as high as 80 dB or greater; quiet suburban neighborhoods experience ambient noise levels of approximately 45-50 dB (U.S. Environmental Protection Agency 1978).

Figure 1 (see above) is a chart of A-weighted sound levels from typical sounds. Some noise sources (air conditioner, vacuum cleaner) are continuous sounds which levels are constant for some time. Some (automobile, heavy truck) are the maximum sound during a vehicle pass-by. Some (urban daytime, urban nighttime) are averages over extended periods. A variety of noise metrics have been developed to describe noise over different time periods, as discussed below.

Aircraft noise consists of two major types of sound events: aircraft takeoffs and landings, and engine maintenance operations. The former can be described as intermittent sounds and the latter as continuous. Noise levels from flight operations exceeding background noise typically occur beneath main approach and departure corridors, in local air traffic patterns around the airfield, and in areas immediately adjacent to parking ramps and aircraft staging areas. As aircraft in flight gain altitude, their noise contribution drops to lower levels, often becoming indistinguishable from the background.

As used in environmental noise analyses, a metric refers to the unit or quantity that quantitatively measures the effect of noise on the environment. For further information, see Noise Models and Metrics

Noise and Land use Guidelines

Noise and Land use guidelines are associated with the development of Day Night Level (DNL) measurements. Such guidelines include the compatibility of certain aviation noise levels with residential areas, schools, and commercial development. Acceptable DNL levels for residential areas and schools are 65DNL, and 70DNL if sound insulated. In commercially developed areas, 75 DNL is acceptable. Noise contour maps are used to determine appropriate land use planning strategies such as overlay zoning, based on compatibility of the land uses at a particular noise level and the DNL levels at the areas surrounding the airport. Contour maps help to show which areas are experiencing high noise levels and are used to determine which areas are considered for zoning ordinances and airport overlay zones.

Federal Aviation Regulations (FARs) have been adopted in an effort to alleviate noise problems.

FAR, Part 36 discusses noise standards for aircraft. It establishes the noise certification of aircraft and categorizes them into stages based on noise level.

FAR, Part 150 was created to implement the Aviation Safety and Noise Abatement Act. This Act (ASNA) directed the FAA to develop regulations on conducting an airport noise compatibility study. Airport sponsors could apply for Federal money to help them conduct the study. The Part 150 regulation provides the standards and procedures for developing noise exposure maps. These maps show the noise levels around the airport in 5 dB increments (65, 70, and 75 DNL or CNEL). The noise exposure maps are used in two ways. The maps help to determine the compatible land uses for different noise levels. The airport sponsor uses these maps to identify noise-sensitive land uses. The maps are also used to propose noise-mitigating measures in an associated noise compatibility program. This can include such things as changes in flight procedures.

The Airport Noise and Capacity Act of 1990 ((ANCA), also known as the Noise Act, instituted several things. Among the most significant, the ANCA required a phase out of Stage 2 aircraft weighing 75,000 pounds or greater and that fly in the continental United States. The phase out had to be completed by December 31, 2000. These aircraft types are older and louder than Stage 3 aircraft, which are now in use. ANCA also mandated that FAA develop a regulation called the FAR, Part 161.

The FAR Part 161 regulation includes the procedures that airport sponsors must follow if they propose to restrict operations of Stage 2 aircraft. This currently applies to aircraft weighing less than 75,000 pounds, which were not phased out, or Stage 3 aircraft (of any weight).

In 2005, the FAA amended 14 CFR Part 36 and the Chapter 14 requirements of countries that adopted Annex 16 and added a new Stage 4 noise standard. It applies to new aircraft designs submitted on or after January 1, 2006.

In 2012 Congress prohibited the operation of jet airplanes weighing 75,000 pounds from operating in the contiguous United States after December 31, 2015, unless the airplane met Stage 3 noise levels.

For a PDF version of this page, click here.

For definitions of words used in this section go to the NoiseQuest Glossary of Terms.