Our Community Tools section includes: Guidance for Prospective Home Buyers, information about How an Aircraft Works, a listing of Frequently Asked Questions, a Link and Learn page for learners of all ages to find out more about aviation, noise, the environment and science, and a Glossary of Terms. 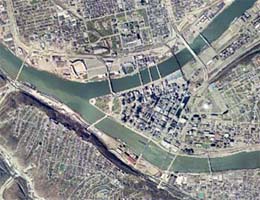 Aircraft are extraordinary vehicles that employ the laws of physics to reach great heights and travel large distances. The following explains the basics of how airplanes work, including the different forces that act on a plane and the way different parts of a plane contribute to these forces.

Forces on a Plane

There are four main forces that act on an aircraft: lift, weight, thrust, and drag. Each of these forces is applied in a different direction.

Figure 1: The forces on an aircraft:
A= Lift,
B= Thrust,
C= Weight,
D= Drag
Picture from: HowStuffWorks.com

As can be seen from the picture above, lift and weight work in opposite direction, as do thrust and drag. If the magnitudes of both forces in a pair are equal, the plane will not accelerate in either direction. However, if they are unbalanced, the plane's motion will no longer be constant:

Figure 2: Different angles of attack of an airplane wing.
Picture from: HowStuffWorks.com

Figure 3: The cross-section of an airplane wing. Paths of air are drawn in blue.
Picture from: HowStuffWorks.com

Weight is the easiest of the four forces to understand because we experience it everyday. Our weight is what keeps us from floating off the ground. Weight is the force on an object caused by gravity.

Thrust is the force on an aircraft that helps to move it forward. Propellers, jet engines, or rockets create thrust. It is opposed by drag.

Drag is a force that slows an aircraft down. Drag, like lift, is only created from relative motion between an object and a fluid (it does not matter which is moving, the object or the fluid, so long as there is a difference in their speeds). It can be thought of as a kind of aerodynamic friction between the object (plane) and fluid (air) as they rub past each other.

Parts of an Airplane

There are two small stabilizer wings on the tail of an airplane: the horizontal tail wing and the vertical tail wing. These wings also have flaps that help control the airplane's direction.

How Does an Airplane make Noise?

A large portion of aircraft noise is caused by unsteady airflow over different parts of the aircraft such as the flaps, slats, vertical tail wing and horizontal tail wing. These are vital parts of the plane that help to stabilize and increase lift. Another major source of aircraft noise is the plane's engine. This is the component of the plane that supplies thrust, the force needed to propel an airplane forward. For more detailed information on how airplane noise is produced, please see Sources of Aviation Noise.

The unsteady airflow around the aircraft is made up of pockets or jets of high and low pressure air. These so called pockets and or jets mix with each other and cause pressure waves to travel through the atmosphere which we experience as noise. Jet engines make noise not only from the moving parts and combustion occurring on the inside of the engine, but also through the hot jet of air coming out of the engine interacting with the surrounding air that the aircraft is traveling through. This creates the same effect as the unsteady airflow around the aircraft, but often contains pressure waves of much larger amplitude and therefore is perceived as louder.

For definitions of words used in this section go to the NoiseQuest Glossary of Terms.